What piece of audio gear has changed as much as the receiver? Since the early 1980s, receivers have grown from friendly devices into monstrosities almost no one can figure out. It used to be that the toughest part of designing a receiver was finding cool new features to add. Now it’s figuring out what features you can afford to cut because there’s no room for any more jacks!

So what have all these new features brought us? Surround sound-but most people never hook up those extra speakers. Video upscaling-but your TV can already do that. Multiroom audio-but it’s easier just to buy another system for that second room. And of course, some of those fancy new receivers let you control your iPhone through your TV. But by the time you go through the onscreen menu, you could have just picked out the tune you want on the iPhone.

When you get right down to it, a lot of people just want to use their receiver to play music. The question is, when you’re just playing music, does a modern home theater receiver packed with the latest digital audio technology sound any better than a vintage stereo receiver?

That’s just what I wanted to find out when I recently spent a few days at Innovative Audio, a Vancouver, BC vintage audio dealer.

Innovative Audio is one of the few places in the world where setting up a test of old vs. new receivers is easy. The store has plenty of vintage receivers in stock, as well as a few recent receivers and lots of great speakers to play the receivers through. 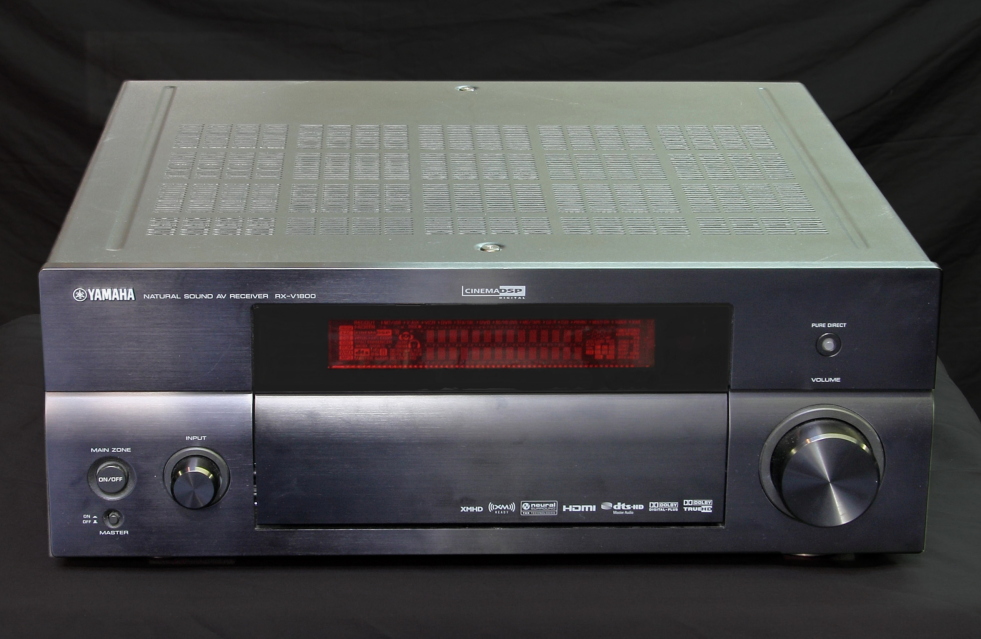 I asked Innovative Audio founder Gordon Sauck to supply me with three receivers, starting with a good-quality model with all of today’s must-have technologies: HDMI switching, video scaling, DTS-HD Master Audio, Dolby TrueHD, etc. He came up with the Yamaha RX-V1800, a 2009 model rated at 130 watts per channel. Yamaha’s home theater receivers have received great reviews since the days of laserdisc, so I was confident the RX-V1800 would give us a good taste of what today’s receivers have to offer.

I then asked Sauck to pick two vintage receivers: one he feels is especially good-sounding and another he considers to be a respectable but more average performer. 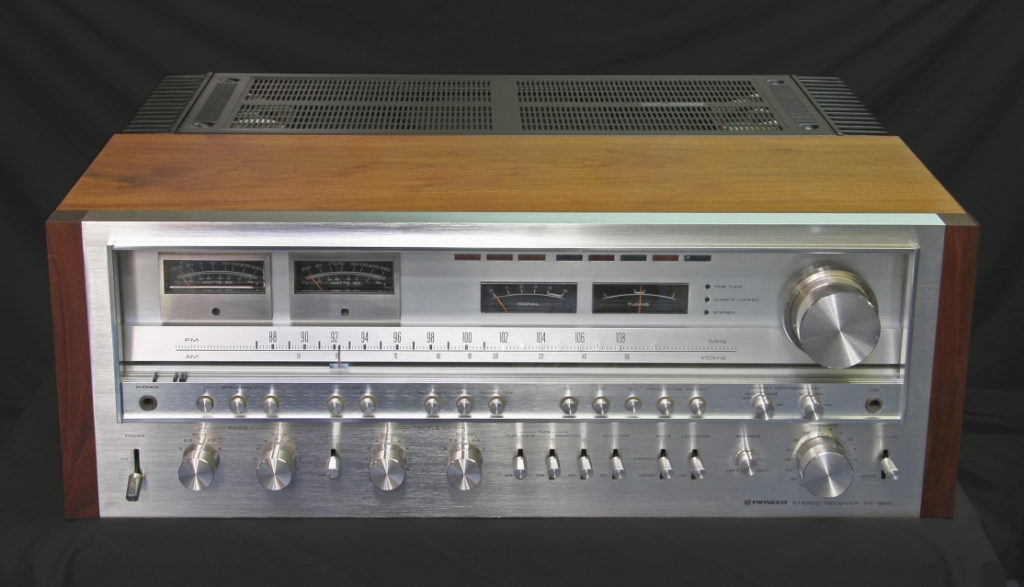 For his top pick, he provided his own Pioneer SX-1980, one of the fabled monster receivers of the late 1970s. This 1978 model is rated at 270 watts per channel, and it’s clear when you see the rear cooling fins, the giant transformer and the four big storage capacitors that the SX-1980’s power rating isn’t just marketing hype. 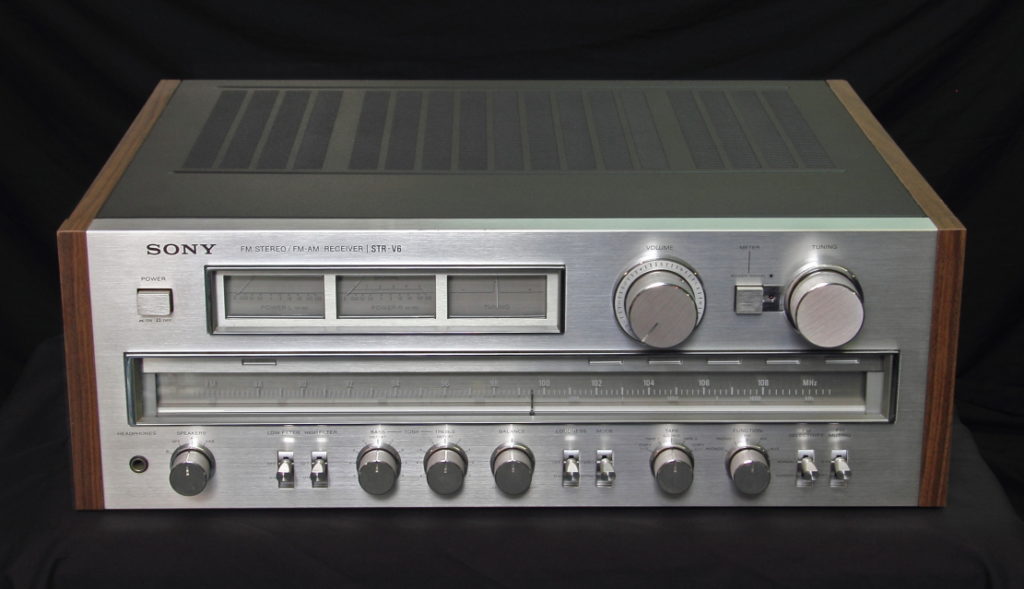 The other vintage receiver Sauck chose was the Sony STR-V6, a 1978 receiver that shares the Pioneer SX-1980’s classic looks but offers less than half the power: a still-ample 120 watts per channel.

Perhaps most important, Innovative Audio has plenty of enthusiastic customers who were willing to participate in the test and eager to find out how the vintage stuff stacks up against today’s state of the art. All I needed to supply was my custom-built modular testing switcher.

With help from Sauck, I removed several speakers from the two-tiered speaker wall to make room for the receivers on the floor. We tried to make the space look as sparse as possible, so listeners were concentrating on the quality of sound and not where it was coming from. We used a set of Mirage OM-7 speakers with fabric suspended between them to hide the equipment so the test would be blind. OK, so it wasn’t the most visually stunning setup I ever did, but it worked beautifully. Not only couldn’t the listeners see the products they were hearing, they didn’t even know exactly what kinds of products they were hearing-I just told them they were comparing “a bunch of amplifiers.”

I used a Denon DVD-2900 DVD/SACD player as the music source, and a Marantz preamp to control the volume. The listeners could play whatever CDs they wanted for as long as they wanted at whatever volume they wanted. A wired rotary switchbox let them select among the three receivers, labeled 1, 2 and 3. I changed the switch assignments of the receivers for each listener so no receiver got an unfair advantage by always being first or last. Because the cables weren’t labeled, I didn’t even know which receiver was which until I traced the connections after each test was done. I even took the test myself, asking Sauck to change the cables around for me then checking afterward to see which receiver was which.

Using a voltmeter and a 1 kHz test tone, I matched the output levels of the receivers so that the maximum volume difference between any two of them was 0.16 dB. All of the receivers were connected into my switcher, and the switcher was connected to the speakers.

The instructions I gave the listeners were simple: “I just want you to tell me which one sounds best to you. They’re all good products, and none of us has ever done this kind of test before so there are no wrong answers. They might all sound the same, or one or two might sound better, I don’t know. Listen for as long as you want and let me know when you’re done.” And with that, I retired to the back of the room to read from Innovative Audio’s extensive collection of old hi-fi magazines, keeping one eye on the action to make sure none of the listeners snuck a peek behind the fabric.

I noticed as the tests went on that the panelists weren’t leaving after they finished-they were hanging around downstairs waiting to find out what everyone else’s results were. Some of them hung out for hours so they could be there when I gave the final results. Talk about dedicated enthusiasts! Every time I announced the latest results, and as one receiver slowly started to emerge as the clear winner, whoops rang through the shop. (Of course, I made sure that none of the incoming panelists were around when I shared the results.) There was almost a hushed reverence as I announced the final tally, and a big cheer went up when everyone found out who the winner was.

After the listening tests were finished, I connected each receiver to my Audio Precision System One Dual Domain audio analyzer to find out if the older receivers could match the measured performance of the nearly new Yamaha. This would provide an important “second opinion.” After all, while human panelists can be swayed by all sorts of influences, the Audio Precision can’t read ads, doesn’t subscribe to any hi-fi magazines and doesn’t even know what products it’s hooked up to. It’s the most brutally honest audio critic you’ll ever find.

A lot of times when I’ve set up blind tests of receivers or amplifiers, the results were mixed-most of the products would earn the affection of at least one panelist, so the exercise proved about as useful as asking everyone to name their favorite color. That sure wasn’t the case here. Even with all the levels carefully matched, and even in conditions where none of the receivers were ever pushed past their limits, the Pioneer SX-1980 simply beat the hell out of the other receivers. Six of the eight panelists picked the SX-1980 as their favorite. All of them praised its awesome bass power, which was by far the most noticeable difference in the sound. “Not only is there more bottom end, it sounds tighter, too,” one panelist said. (Note to all the audio smarty-pants out there: No, this isn’t because Pioneer “goosed” the bass by artificially boosting it, as you’ll see in the lab measurements.) 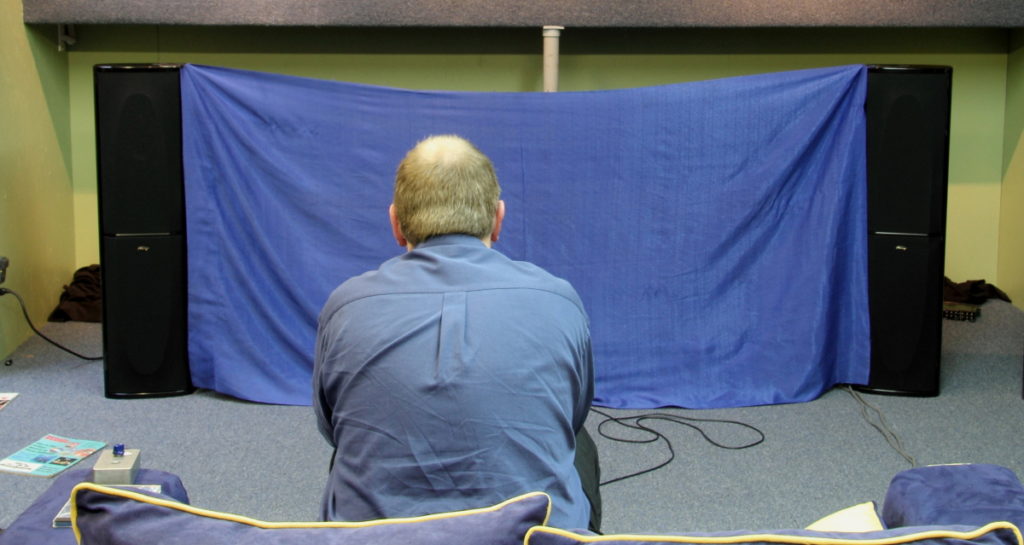 But the SX-1980 wasn’t just a bass monster, because the mids and treble sounded great, too. “It’s like being hugged by the vocal,” one panelist said. I noticed the same exact thing; the background vocals on James Taylor’s “Shower the People” (from the PCM stereo track on Live at the Beacon Theatre) wrapped around me in a way they didn’t with the other receivers. “There’s more presence and more detail,” another panelist said.

Not that the other receivers didn’t put up a good fight, though. No panelist ever used the word “suck” in his or her description, although all but two of them felt the Sony STR-V6 and the Yamaha RX-V1800 didn’t sound as good as the Pioneer SX-1980. Mathematically, the STR-V6 and the RX-V1800 tied for second place; of the two panelists who didn’t prefer the Pioneer, one gave first place to the Sony and the other picked the Yamaha. The descriptions of the Sony and Yamaha varied, but the general perception was that the Yamaha sounded a bit “bright,” “crisp” and “steely,” while the Sony “lacked detail” and sounded somewhat “flat” and “uninvolving.”

By this point, we knew that at least according to our ears, the vintage receivers were at least competitive with the modern receiver and, in the case of the Pioneer SX-1980, subjectively superior. Surely, though, three decades of engineering advances would at least allow the Yamaha RX-V1800 to show a measured improvement?

Here’s the results I got. Unless otherwise noted, all measurements are referenced to 1 watt (2.83 volts) at 8 ohms.

Overall, the measurements for all three receivers showed that none of them has any clear technical flaws that would be readily audible. Although the measurements show the Yamaha RX-V1800 has a few technical advantages over the others, I’d have to award the “most kick-ass measurements” prize to the Pioneer SX-1980, which measures as well as most of today’s better integrated amplifiers. (I’d have said “stereo receivers” except they barely make them anymore!)

Does this test mean that vintage receivers are better than new receivers? Of course not. Looks aside, the Sony STR-V6 is clearly no better than the Yamaha RX-V1800, but it’s as good a choice for stereo listening and quite a bit less expensive than a midpriced home theater receiver. But the Pioneer SX-1980’s stellar performance shows that it’s possible to get truly world-class sound from a vintage receiver. I’d be curious to put the SX-1980 up against the very latest and greatest high-end audio gear-but I’m sure the manufacturers of the new stuff would rather I didn’t.

Just think: Lurking at a garage sale, a swap meet or a vintage audio dealer near you may be the best receiver you’ll ever own, at a price far less than what you’d pay for the top components of today. And just think of the giant arm muscles you’ll develop lifting the Pioneer, and the fit, toned legs you’ll get walking up to adjust the volume instead of using a remote control!