That’s why the cassette deck shootout that Innovative Audio conducted last year proved so controversial. One of the decks-a Nakamichi Dragon, a product vintage audio buffs particularly prize-didn’t fare so well. Of course, Dragon owners weren’t pleased. But that was just a listening test. Even though any audio product ultimately has to be judged on its sound, the human ear is a fickle, inconsistent and easily influenced judge.

When Innovative Audio owner Gordon Sauck heard I was coming to Vancouver for a week, he asked me to conduct a more scientific test-to subject some vintage decks to the judgment of my Audio Precision System One Dual Domain analyzer. The Audio Precision is like the Terminator. It can’t be reasoned with. It can’t be bribed. And it will not stop until it uncovers the cold technical truths about your beloved audio gear.

But still, why focus so much energy on cassette decks? “They’re cool again,” Sauck told me. “We’re seeing a lot of vintage decks going for $400 now, where they were going for just $100 or $200 a couple of years ago.”

So the call went out, to any Innovative Audio customers who would dare to put their prized deck up against my lab gear. A few weeks later I found myself in Gordon’s office, facing five cassette decks and some anxious vintage audio enthusiasts, their nerves pushed to the limit by my threat that I would drag the losing deck on a rope behind my car.

Esoteric V-9000: This champagne-finish beauty is owned by Nando Logiacco. The V-9000 hails from around 1990, and it was made by TEAC, the parent company of Esoteric. It’s easily the most elegant of all the decks here.

Marantz SD-60: One of two decks from Paul DeMara’s extensive collection of champagne-finish classics, the SD-60 dates back to 1989.

Pioneer CT-F1000: The deck that inspired the most boasting from its owner was this gem, the proud possession of Innovative Audio owner Gordon Sauck. The CT-F1000 was made between 1977 and 1979. It’s noteworthy for its lack of a cassette door; the mechanism is mostly out in the open, with the heads and other more sensitive workings covered by a hinged flap. The blue paint job and the large Pioneer logo on top are custom.

Pioneer CT-F1250: A later, more modern version of Sauck’s CT-F1000, this circa-1980 CT-F1250 is owned by Marc Carriere, an admitted non-enthusiast of cassette who claimed he didn’t use the deck much but was just curious how it would perform.

Sony TC-K808ES: Another from the collection of Paul DeMara, the 1993 TC-K808ES is the most modern deck here. It’s one of only a relative handful of cassette decks ever made that included Dolby S noise reduction, Dolby’s “last hurrah” in analog recording technology. This is a 220-volt deck originally sold in Germany, so I used a 220-volt adapter that Paul supplied to power it.

HOW I DID THE MEASUREMENTS

I’d never measured the performance of a cassette deck-or for that matter, any type of tape deck-before. To figure out how to get the job done, I went through Innovative Audio’s extensive collection of Stereo Review and High Fidelity magazines from the 1980s. After reading about a dozen cassette deck reviews, I decided on seven different measurements:

Stereo frequency response with Dolby B – Same as above with the test tone recorded and played back with Dolby B noise reduction activated.

Unweighted signal-to-noise ratio (S/N) – This measures the amount of noise versus the level of a recorded 1 kHz test signal, expressed in negative decibels. The lower the number, the better. The 1 kHz test signal was recorded at 0 dB indicated level on each tape deck, and measured in the left channel.

A-weighted S/N – Same as above, but with the introduction of an A-weighting curve, which roughly mimics the sensitivity of the human ear. It filters out bass and treble frequencies to focus on the midrange.

A-weighted S/N with Dolby B – Same as above, but using a 4 kHz test signal because Dolby B is effective only at frequencies above 1 kHz.

Crosstalk, left-to-right and right-to-left – This measures the leakage between the two stereo channels at 1 kHz, expressed in negative dB. The lower the number, the better. A 1 kHz test signal was recorded at 0 dB indicated level in the left channel only with the right input terminated, then in the right channel with the left input terminated.

Wow and flutter – This measures frequency stability, which is affected by small and regular speed variations caused by flaws in a tape deck’s rotary components, such as the capstan and pinch roller. I measured it using a 3,150 Hz test tone, recorded at -10 dB indicated level on each tape deck.

After talking with Sauck and DeMara, I decided to use BASF Chrome Extra CrO2 tape for the tests. Sauck had a stock of so-called “metal” tape on hand, but because CrO2 is much more readily available, we decided that testing with it would better reflect the results most cassette deck users would get in normal use. Each test recording was done with a factory-fresh tape. To loosen up the tape, we fast-forwarded and rewound each one once. I started the test recordings 1 minute into each tape. Recordings were made from my custom-burned test CD played back on a Philips CD473 CD player (which I also measured with the Audio Precision just to make sure it was working perfectly, and it was). The Sony is the only deck with switchable Dolby HX noise reduction, which I left turned on.

I didn’t do any adjustment or cleaning on the cassette decks; the owners were required to do all that for themselves. The contestants repeatedly accused Sauck of having tweaked his Pioneer CT-F1000 by taking advantage of Innovative Audio’s extensive test and repair facilities, as well as the skills of ace tech Brian. But he insisted that he’d done nothing more than clean it.

Of course, these are all well-used decks, and there’s no way for me to know how much their performance has been affected by aging, normal wear and tear, and the maintenance (or lack thereof) that their owners have performed. I’m used to digital recording gear, so I was a little shocked at the significant channel imbalances I saw, and at the difficulty I had setting precise recording levels for the test signals. But such is the nature of analog audio.

Tech-savvy readers may be brimming with questions and challenges. Let me now do my best to answer them in advance: 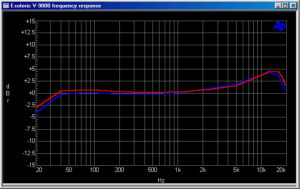 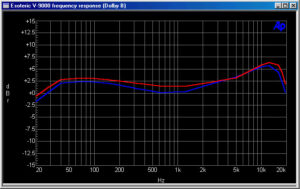 The Esoteric V-9000 had essentially flat frequency response from 40 Hz to about 4 kHz. The response rose by about +4 dB at 12.5 kHz, and it was the only deck that delivered response up to 20 kHz. Activating Dolby B introduced a midrange dip, so that bass was essentially boosted by about +2.5 dB and treble was boosted by an average of +6 dB. While it had the second-best Dolby B S/N, the other measured results were about average. 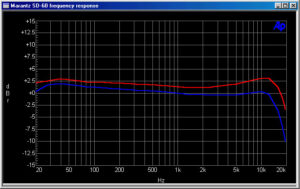 The Marantz SD-60 was one of the two standouts in this shootout. It’s response was close to flat from 20 Hz all the way up to about 15 kHz, although it didn’t have response all the way up to 20 kHz as the Esoteric V-9000 did. The left channel (blue trace) shows a slight boost below, maxing out at about +3 dB at 40 Hz. Of all the properly functioning decks (more on that below), it had the best signal-to-noise measurements. Crosstalk and wow/flutter were about average. 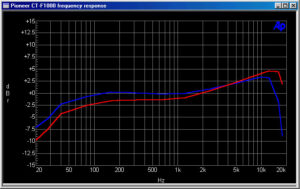 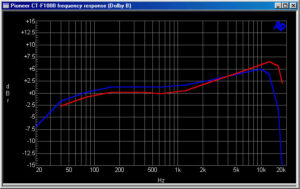 The CT-F1000’s frequency response showed a bass roll-off below 100 Hz and a big boost in the treble. With Dolby B off, treble at 12.5 kHz was boosted by about +4 dB in the left channel (blue trace) and +6 dB in the right channel. Bass response was down by an average of about -8 dB at 20 Hz. Results with Dolby B on were about the same. All signal-to-noise ratios were the worst of the five decks, and crosstalk was the highest, especially right-to-left. Wow/flutter was the second-highest. 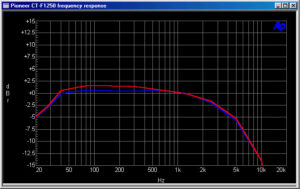 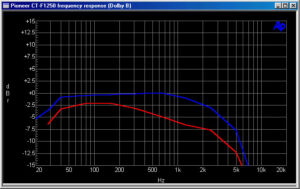 Clearly this deck had a problem. Its high-frequency response is way, way down: -15 dB at 10 kHz without Dolby B, and -15 dB at 5.8 kHz (right) and 7 kHz (left) with Dolby B on. While the left/right channel balance was way above average without Dolby B, it got very uneven when I activated Dolby B. Signal-to-noise ratios were the best measured, but that’s only because of the deck’s extreme high-frequency roll-off. Wow/flutter was double that of some of the other decks. Clearly, this has a maintenance issue or a defect, because it should be at least as good as the older but similar CT-F1000. 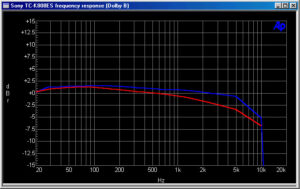 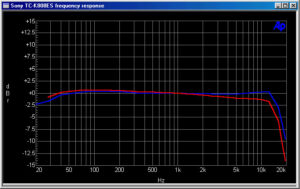 This deck completely rocks. It’s the only one that delivers what I’d consider to be a truly flat frequency response, at least without Dolby B. It’s down only -2.5 dB at 20 Hz, and from 40 Hz to 12.5 kHz it is very close to dead flat in the left channel (blue trace) and just a little less close to flat in the right channel (red trace). True, in Dolby B there was a big treble roll-off above 10 kHz, but I got this measurement only after trying it several times. I’m convinced that something about the deck’s 220-volt power supply or the 110-to-220-volt converter I used threw off the Audio Precision. Surprisingly, signal-to-noise ratios weren’t quite as good as the Marantz’s, although I’m sure if I had tested the Sony with its Dolby S NR activated it would have been the best of the bunch.

SO WHO’S THE WINNER? (AND WHO GOT DRAGGED BEHIND MY CAR?)

There’ s not an obvious winner here, but there are two losers: the Pioneer decks. The CT-F1000’s measurements were substandard, and the CT-F1250 had some sort of major functional problem.

And no, I didn’t drag Mark’s CT-F1250 behind my car. It’d be a shame to destroy such a beautiful piece of equipment-and as soon as Brian saw the measurements, he hauled it back to Innovative’s test bench and I’m sure he’ll have it back in shape soon.

By the way, if you want to evaluate your cassette deck’s frequency response to make sure it’s not as messed up as the CT-F1250 was, go to trueaudio.com and download the free copy of TrueRTA software. Use TrueRTA’s generator to make pink noise, then record the pink noise on a tape. Play back the tape into TrueRTA’s spectrum analyzer. Even though the free version has only 1-octave resolution, that’s enough to see if you have major dips in the bass or treble.

Deciding between the others is kind of a toss-up. I know which one I’d want: the Sony, because it’s clearly the best-engineered deck here-no surprise considering it’s also the newest. But the Marantz and Esoteric decks also had their strengths, and either one would make a fine addition to any system.

If you can find them, that is. When Innovative customer Cam Steere, who doesn’t have a cassette deck, saw the Marantz’s frequency response graph appear on the Audio Precision, he immediately whipped out his smartphone and started bidding for one on eBay. Grab ’em while you can!